Alberta holds many amazing possibilities for exploring fantastic trout waters. We are lucky to have many world class rivers within striking distance. Sometimes deciding where to fish can be the most difficult decision you’ll have to make all day. It’s like standing in the beer cooler at the store and wondering which flavorful Alberta craft beer to enjoy-- it’s a great predicament to be in.

Depending on the species you are planning on targeting, the areas you want to start searching will vary. The only trout that are actually native species to Alberta are the westslope cutthroat trout, bull trout (although the bull is a member of the char family), and the Athabasca rainbow trout. All other trout have been transplanted from elsewhere. Browns, rainbows, and eastern brook trout were all introduced in the early twentieth century. It should be noted that some of these trout streams also hold arctic grayling and mountain whitefish, which are also native to Alberta. However, every piece of moving water in Alberta that holds trout currently contains a wild and self-sustaining population. In fact, Alberta was one of the first jurisdictions to adopt the fisheries management strategy of not stocking streams with hatchery trout. A Zoologist at the University of Alberta by the name of Dr. R.B. Miller concluded from a study that stocking hatchery trout in moving water was ineffective and created too much competition for food within the ecosystem, resulting in a decrease in total fish populations. Miller’s findings and Alberta’s revolutionary new strategy were deemed heresy initially, but many fisheries managers have confirmed Dr. Miller’s findings and have adopted the same strategy of allowing wild trout populations to thrive without stocking. Thanks to Dr. Miller, we have the pleasure of catching wild trout in moving water in every corner of the province. 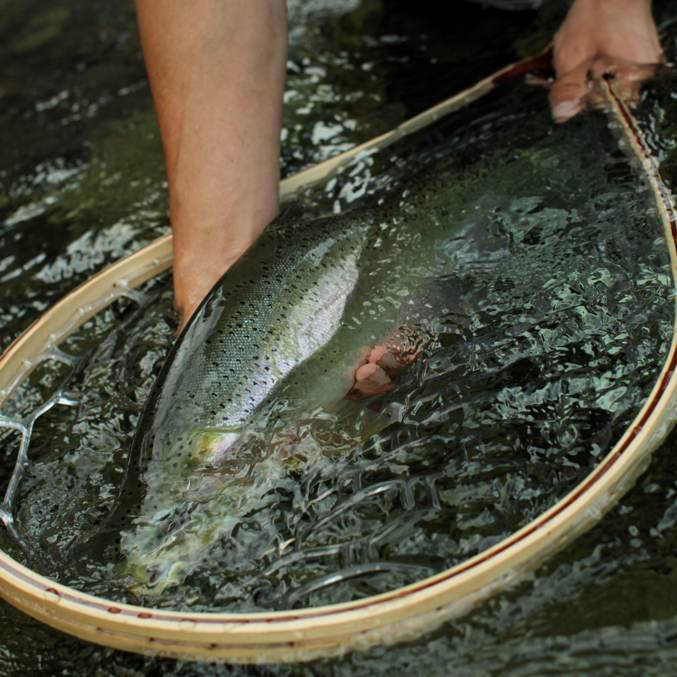 Central Alberta holds plenty of beautiful spring creeks with phantom-esque resident brown trout. These can be some of the most challenging waters to fish in all of Alberta. Targeting these trophy browns can be an extremely satisfying experience when successful, but a maddening experience the rest of the time. If you love stealthily stalking spooky browns in small, spring creeks, you will want to focus your efforts in Central Alberta. The area where you will find these springs are at a slightly lower altitude, where you would normally find greater numbers of brown trout. Don’t expect to find large numbers of fish though, and don’t plan on having an easy day on the water. However, hooking into one of these wiley fish can make the whole ordeal worthwhile. Some of the smaller creeks require alternate casting methods because of overhanging willows and dense brush that line the banks. Wading some of these creeks can also be out of the question, as the creek beds can be soft, silty mud that can ruin your chances of hooking fish downstream. Plan on covering a lot less ground, but moving slowly and methodically. After cautiously approaching a nice looking pool, be prepared to wait paitiently, while remaining focused on the water in front of you before you make a single cast. If you are patient enough and a little lucky, a monster brown will be feeding and eventually cycle into a position that is reachable. A perfectly presented cast at this point might just do the trick.

Access can be difficult on many of these creeks, but still very doable. A great place to start looking is the many tributaries of the Red Deer River and North Saskatchewan Rivers. These can be accessed off of highway 22, anywhere between Cochrane and Rocky Mountain House. 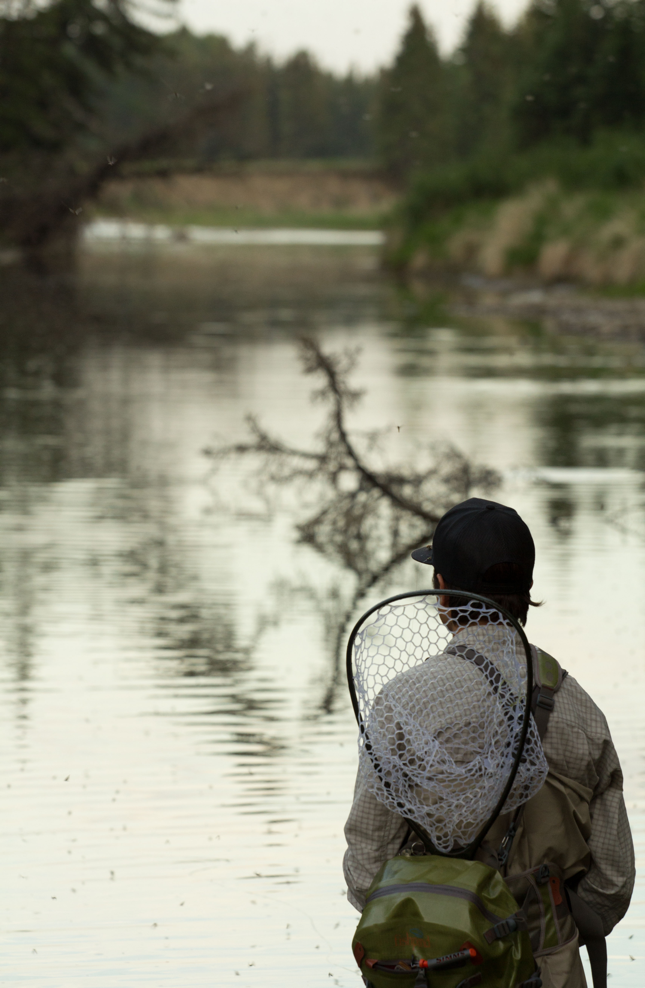 As you travel closer towards the rocky mountains and gain elevation, you can run into more of Alberta’s native trout species. This area of Alberta, known as the high country, is home to large numbers of cutthroat trout, rainbow trout, bull trout, brook trout, and even arctic grayling in some systems (Athabasca and Peace River). If the goals for your trip are to catch large numbers of voraciously feeding trout, the high country is where you want to be. Bountiful populations of these species can be found in many different freestone streams and alpine lakes. Some pure-strain cutthroat have been preserved in high alpine lakes and headwaters of some mountain streams, but in a lot of our streams, the cutthroats’ purebred genes have been typically diluted with rainbow trout lineage, resulting in the hybrid ‘cut-bow’. For this reason, cutthroat are considered a “threatened” species in Alberta but that doesn't mean that you won't be catching fish all day. Fishing in the high country also gives you the opportunity to target Alberta’s provincial fish-- Salvelinus Confluentus, also known as the Bull Trout. These fish are currently an at-risk species and a strict 0 limit is enforced province-wide. Native bull trout are found in nearly every major river system in Alberta, and can be found in healthy, thriving populations in some streams now as a result of the catch and release legislation that was passed 25 years ago. Bull trout fishing is a blast for streamer junkies that enjoy casting large bait fish patterns into deep pools (and some smaller creeks too) for Alberta’s top predatory fish. An ideal place to start looking for productive high country streams is along Alberta’s Forestry Trunk Road. Dubbed “Alberta’s Trout Highway” by Alberta fly-fishing legend Barry Mitchell, this secondary highway (also known as highway 40) extends from Grand Prairie south to Crowsnest Pass, and allows for access to many beautiful high country streams along the way. As you venture further north, there are more opportunities for a traditional northern Canadian fishing experience. There is plenty of pike and walleye fishing, however; there are still systems that hold bull trout and arctic grayling. 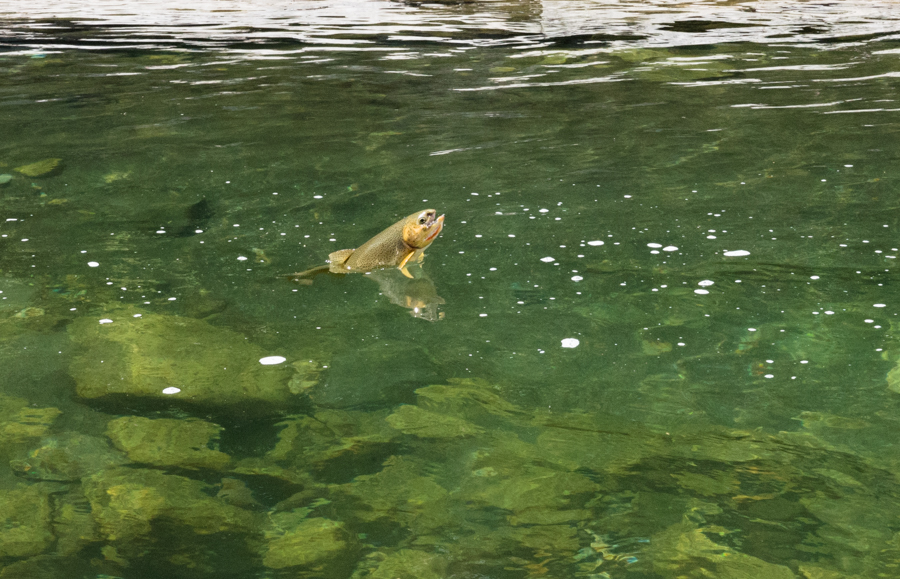 Originating in the Rocky Mountains as snow melt and flowing eastward, major waters such as the Red Deer, Old Man, and the world-class Bow River drain massive amounts of water from other mountain tributaries. Although the Peace River and Athabasca River systems can be productive trout fisheries, the 3 aforementioned systems are arguably the best fly-fishing waters in the province. Both the upper and lower sections of these rivers are fishable on foot, but they are absolutely more ideally suited to fish from a boat in the lower sections. Because Alberta has prolifically been known for our excellent fly fishing, there are many resources that an angler looking to explore the province can use for guidance. Obviously, visiting the local fly shop is a great place to start. There are some excellent books that are great resources for finding some great water in Alberta. Many of these books are available to order online through the Bow River Troutfitters store here. 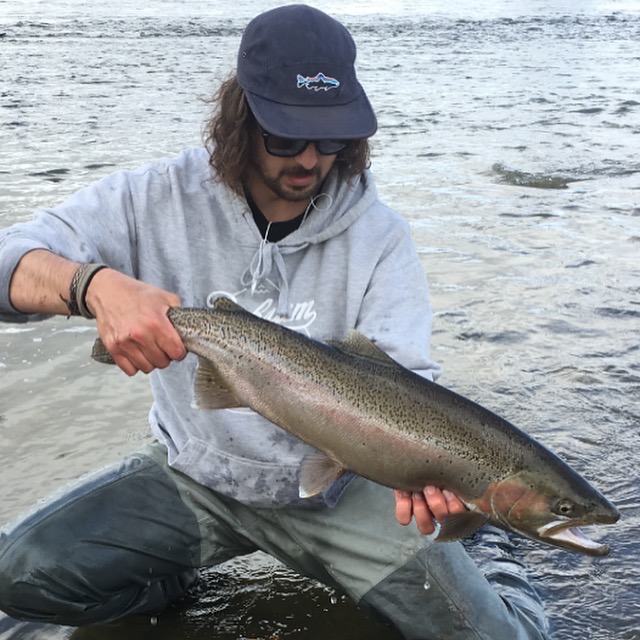 A large male rainbow trout from the Bow River.

Below are hatch charts for the Red Deer, Bow, and Old Man river. These charts are a rough guideline for what insect hatches to expect in these three river systems, but as we know, nothing is certain when it comes to a day on the river. Hopefully this general guideline will be able to provide you with the information to properly prepare your fly arsenal for your trip. We have added an impact /5 section to the charts as you can see below. This is our subjective measure of the general importance of these hatches to the fish. A 1/5 means that the hatch exists but it doesn't usually get the fish going is a serious way, a 5/5 means that we can depend on catching fish on this particular hatch every year without fail.

*Applies more to Higher Elevation and mountain streams such as those indicated above, than lower elevation Foothills streams hatches. 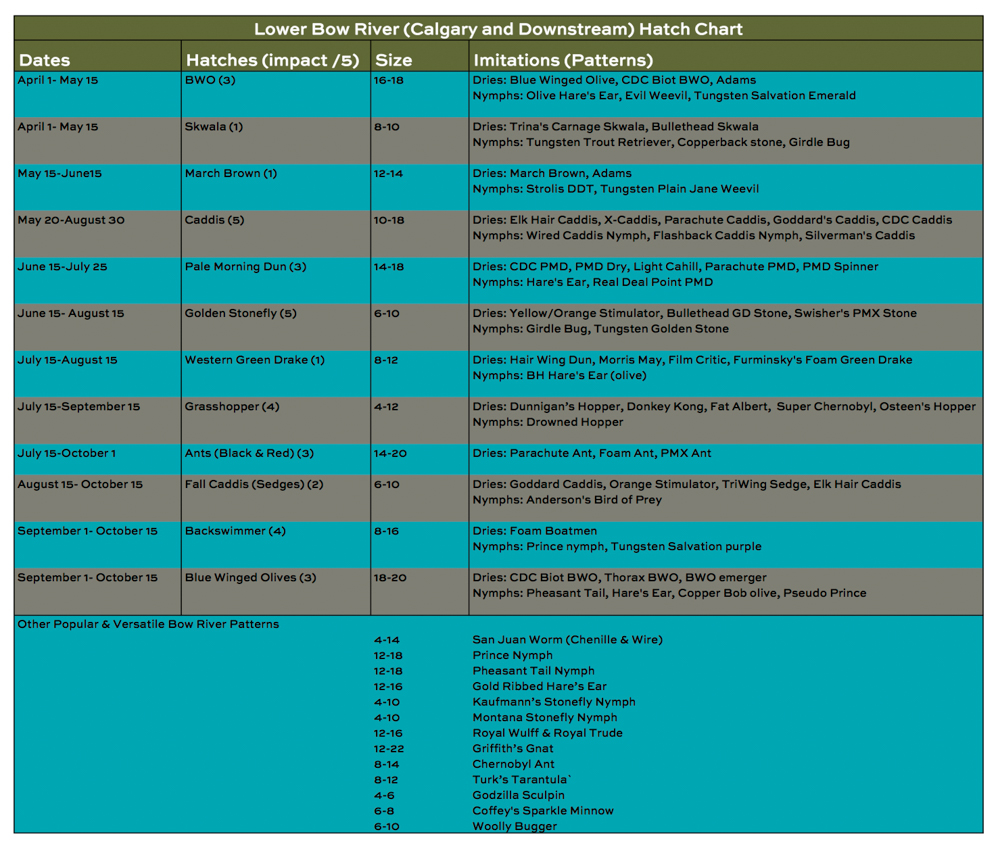 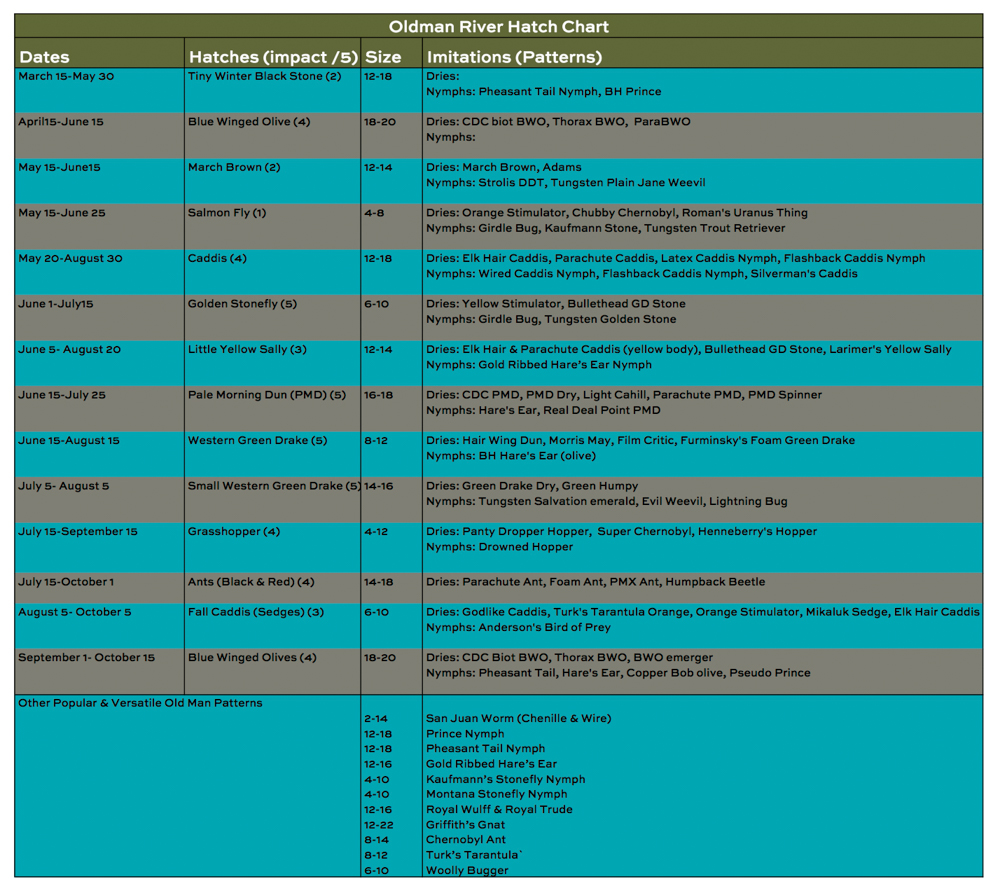 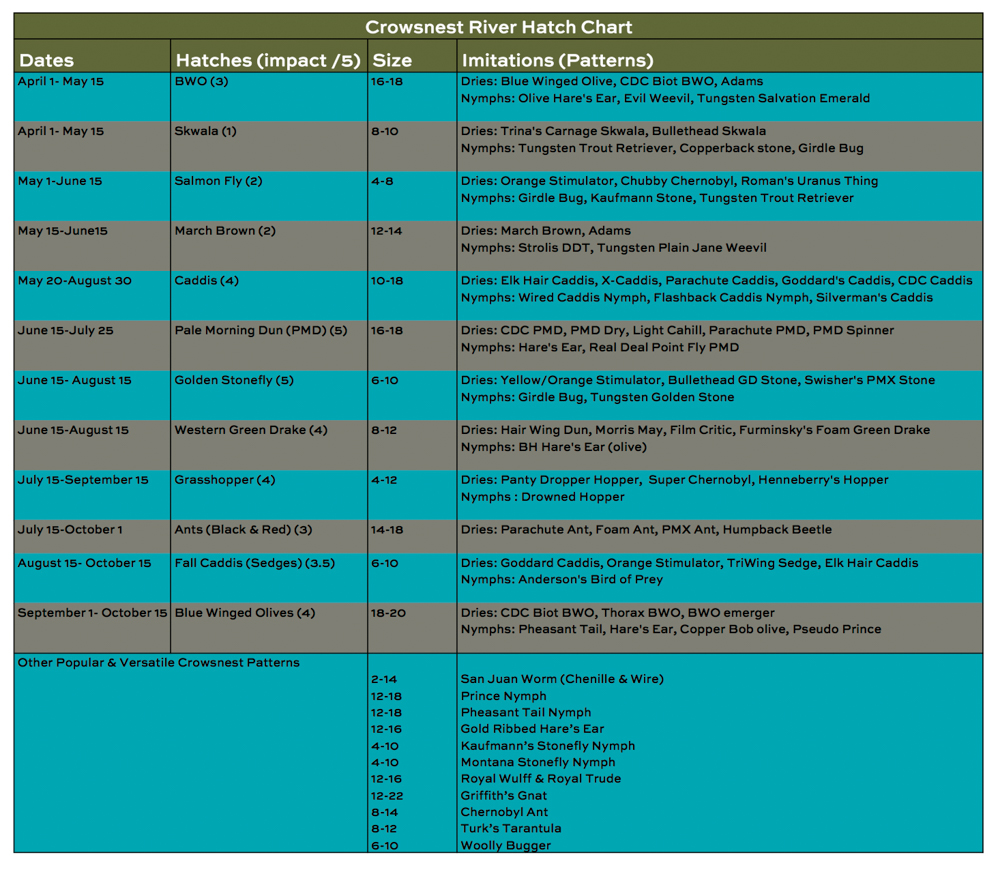