Two-handed fishing has become drastically more popular over the last few years, particularly with the advent of 'trout spey,' or the use of light two-handers when fishing for trout. At Troutfitters, we're fully on-board with trout spey fishing because the casting is dang fun and there aren't many things that are more exciting than hooking into a fish on a tight line. Even with it's great popularity, we still get quite a few customers who are keen to get into two-handed fishing but are unclear about how the line system works and what they should be using to fish for trout, steelhead, salmon, etc. Here, we break down 'running lines' and discuss the pros and cons of the main types of running line you'll find on the market.

Factors that differentiate between fun-to-use, and garbage running lines:

Knots/tangling: Is the running line prone to getting in knots and tangling while fishing? Generally, this is due to memory.

Handling: How does the running line feel in your hand? This can refer to how it feels when you’re fishing and retrieving your line and when you’re holding your line to execute your cast. Handling is subjective to each angler and usually based on what each person is familiar with.

Shooting: How much distance can you get with your cast? This is based mostly on how much friction there is between the guides and the line.

Floating: Does the line tend to stay on top or sink below water while you’re managing your loops and making your cast? If it sinks below the water, it will require more energy to shoot line.

Holds Water: Does the running line ‘hold’ water and bring it up through the guides and into your hands while you’re stripping? This is mostly disadvantageous in cold temperatures when your guides and hands are freezing up.

Stretch: How much stretch does the running line have? One could argue that a running line with high stretch may equate to less hook-ups, especially on smaller fish.

Rigidity: Is the line supple or rigid while fishing? This is a tough one because it’s largely regulated by air and water temperature. A supple running line is nice to manage, but if it is too supple your loop won’t maintain its structure over long casting distances.

Familiar feeling for most fly anglers and easy to manage in your hands. Making it a good choice for single hand set ups where you’ll be fishing with the intent of catching fish on the retrieve. Doesn’t have too much memory and floats well when you’ve got multiple loops dragging in the water. Low stretch for good hook-ups.

Doesn’t shoot as well as monofilament. Also, holds onto water when you’re stripping so it makes your hands cold or brings more water into your quickly freezing guides on a cold day. 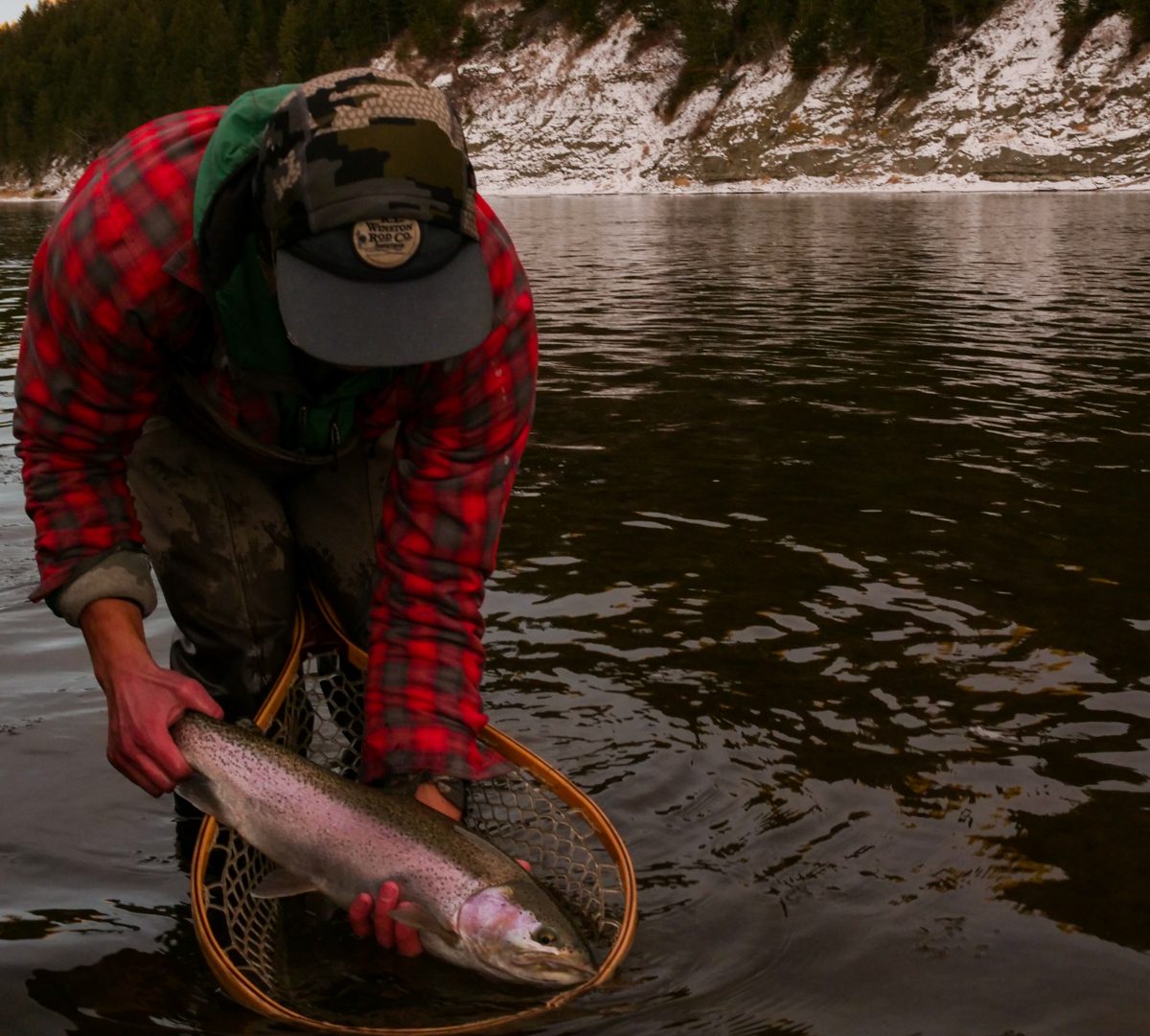 I caught this rainbow while fishing a shooting head/running line set-up on a 9'6" 7 weight. In this case, I was using a coated running line because I was fishing my flies on a stripped retrieve and wanted the advantage of easy handling and minimal memory. When I hooked this fish, I certainly didn't want any knots in the running line, which I had stripped into a pile around my feet.

Shoots like a damn. Once it’s been fished and straightened out it is very supple and nice to handle. Holds very little water so you can avoid cold hands and iced up guides, to an extent.

Can have bad memory, eliciting exceptional frustration. Stretches, bad for hook sets. Not as nice for handling during casts if you’re used to traditional coated fly lines. They can also become too supple in hot conditions, losing their ability to maintain long distance casts.

Elliott shooting the RIO Gripshooter. This is an example of line that 'shoots like a damn.'

This Airflo Switch Float is an example of a great switch line, but if it doesn't work perfectly for your rod and in all of the applications you'd like, then it might be more of a hassle than its worth.

Integrated lines are another option for two-handed lines, although they iare more common for ‘switch’ rods and traditional mid and long belly Spey lines. Integrated lines are great because there’s no rough loop-to-loop transition between the running line and the shooting head. The problem is that you must be completely certain it’s the correct line for your rod. You also don’t have the option to use the same reel on different rods or easily switch lines for different applications throughout a day.

Use light running lines ~ 20 to 35lbs (0.032”to 0.040”) for rods under #6 in predominantly trout fishing situations. Heavier running lines (35lbs and greater) are best used for salmon fishing. For big salmon like chinooks and large atlantics use 50lb running lines. If you’re using heavy running lines with light shooting heads, you may be losing some casting distance because it requires more energy to pull heavier running lines out of the water and through the guides.

A bit about what we sell and why:

Over the years, us folks at BRT have fished a lot of different running lines and with we’ve time narrowed down our selection to the best of the best. 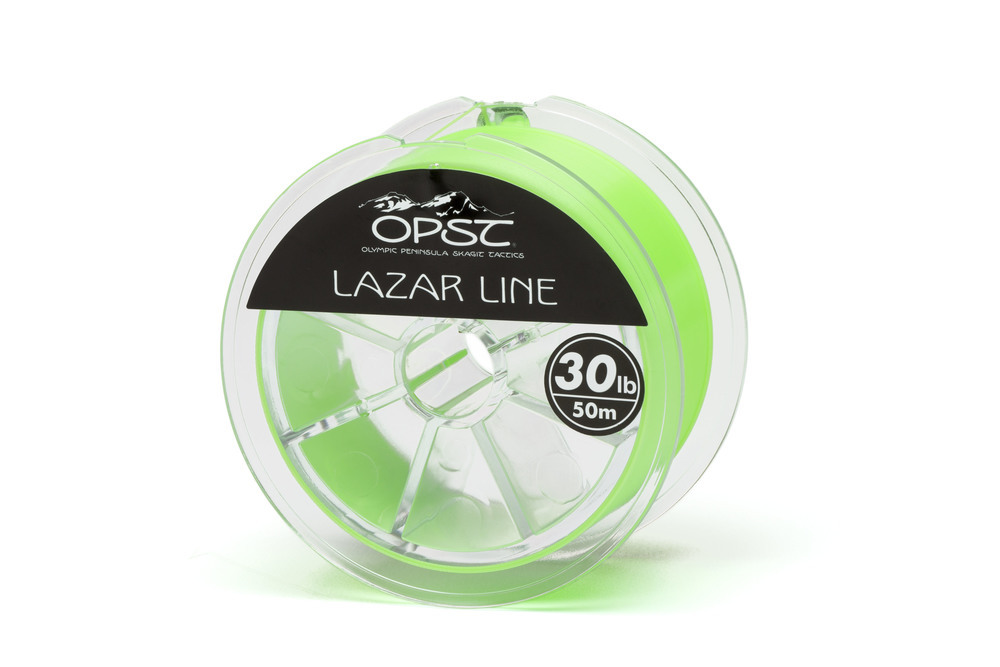 Although OPST (Olympic Peninsula Skagit Tactics) is a relatively new company, the folks behind this brand have a serious amount of experience with Skagit casting and the lines that go along with it. The Lazar line is monofilament that is ovular in shape, so it shoots like a damn. The oval shape also helps eliminate twisting of the line, especially when winding it onto your reel. It has amazingly low memory, not too much stretch and is meant to perform consistently in a variety of temperatures. The only folks who won’t like it will be those who swear by the feel they get with their coated running lines.

The RIO GripShooter incorporates the shooting excellence of monofilament with the great handling found in a coated running line. RIO has added a 14’ coated handling section at the shooting head end of a 100’ monofilament running line. The handling section is there to improve the feel of the line between your fingers and the rods handle while you’re casting. This is probably our most popular running line for folks fishing the Bow in winter who have cold hands but still want to shoot line to the other bank. 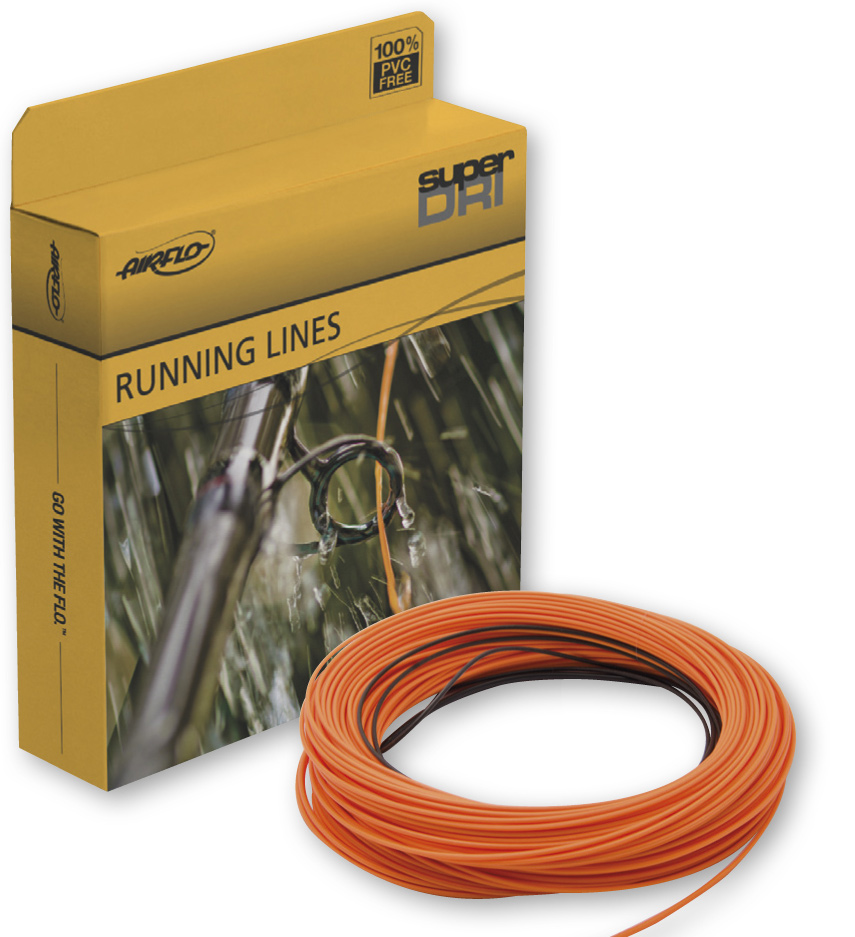 A fully coated running line, that uses no PVC and incorporates Airflo’s Super-DRI technology. The Super-DRI coating keeps your line floating high on the water so you aren’t losing casting distance to line that is sucked under water. Making for a durable, slick shooting, low stretch and low memory running line. It doesn’t shoot as well as a mono running line but its great feel and handling certainly makes up for it amongst those who prefer coated running lines.