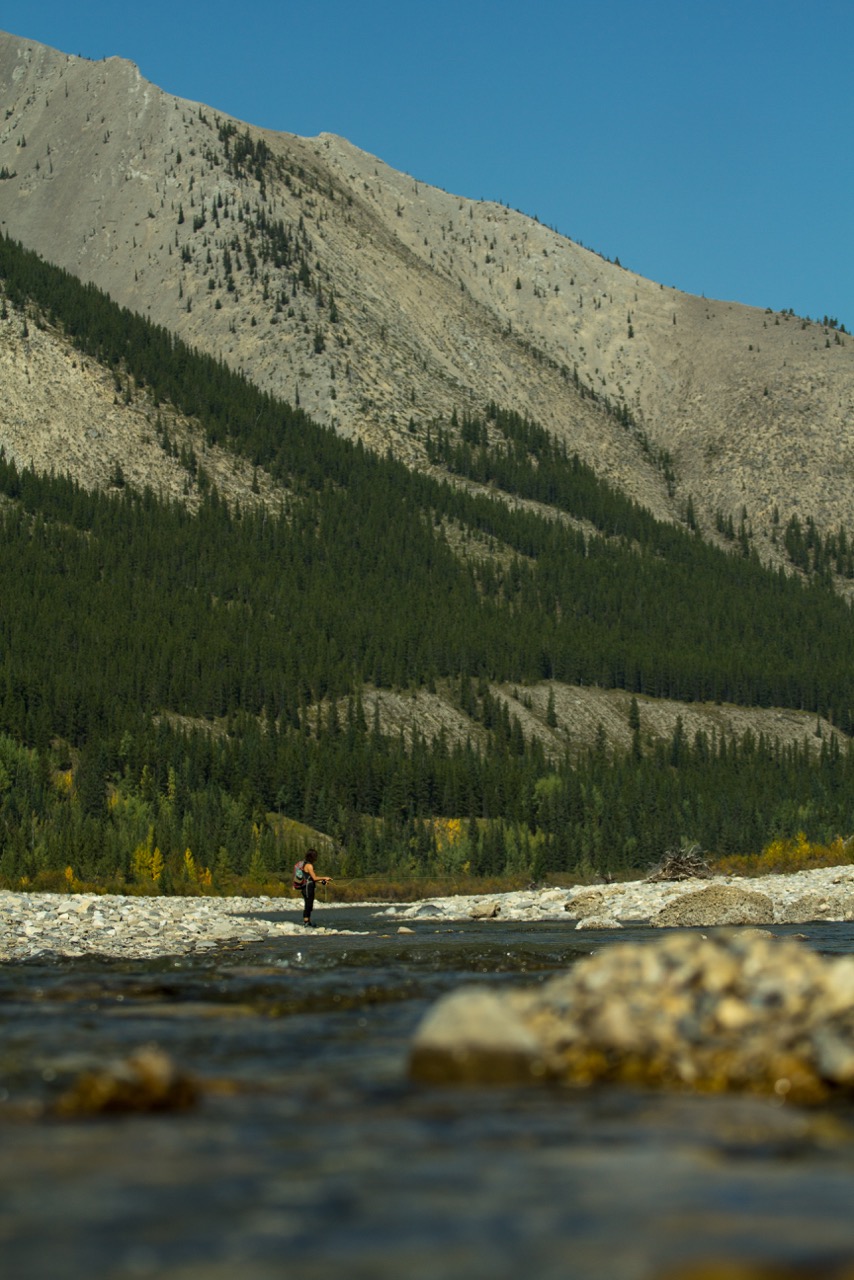 Smaller bugs work better in the late season for numerous reasons. First, there are fewer mature insects, particularly larva, in the water once fall comes around because most mature aquatic insects have already ‘hatched.’ Because of this, smaller insect immitations will match a larger variety of the natural insects in and on the water. Another reason to fish smaller flies is that many fish aren’t as accustomed to being stung by small flies as they are by large ones. I would guess that this is due to most anglers’ preference to use larger dries and nymphs because they’re easier to see and fish with. Fishing smaller flies tends to be more natural and set you apart from the hordes of people who tend to keep their hopper rods rigged from August to October.

Through September and into early October, trout are still holding in the faster water in many of our streams. September is a great time to fish streamers, nymphs and dries to fish that are holding in fast moving water that is anywhere from a half a foot to four feet deep. Look for any fast riffle with appropriate depth and there’s likely trout behind even the slightest structure. This holds true from the Bow, to all of our mountain streams; where fast water is frequently overlooked.

Fish are in the slow water during the fall too. This holds true throughout the year, but becomes particularly important to consider as we reach the end of fall and early winter, when nearly all trout will congregate in specific wintering water. This water should entail the majority of one’s focus by the end of October. Look for depth changes such as buckets and troughs that move through walking speed water and you’ll find fish.

Although this isn’t always the case, smaller tippet can become important for catching fish when the water in our streams becomes increasingly low and clear. Luckily for us Albertans, light tippet means 4x and 5x, but even that small change from 3x is adequate for fooling the more cultured trout. Lighter tippet is important not only because fish can’t see it as well, but also because it gives flies more freedom to attain a natural drift. Where heavy, stiff tippets tend to limit a fly’s mobility, light tippet will allow a fly to move around freely in the water.

You’re right, we just talked about fishing smaller flies in the fall, but the opposite is true for streamer fishing in the fall. While trout aren’t always willing to eat big streamers throughout the summer, it seems that fall time gets trout feeding on big food sources in preparation for cooler months. Brown trout are also preparing to spawn and in doing so will become more and more aggressive towards any big streamers placed in their general vicinity.

When water levels are low and visibility is good, spotting fish becomes a very effective way to find and catch large trout. Although sight fishing can seem intimidating and time consuming, it is almost always worth the effort. Whenever walk and wading in the summer and fall, spend some time on the bank above whatever run you’re about to fish and watch the water for movement. Many of my larger trout come from watching runs from high banks and spotting large trout cycling through inside flats or holding in shallow runs and riffles. Once you spot them, spend the time to slowly approach and present flies. As long as you stay out of their field of view, most spotted fish can be caught if one is persistent.

First frost: what does it mean?

The first hard frost seems to impact multiple factors in a trout’s world. Terrestrial numbers are greatly reduced and water boatmen numbers usually correspondingly increase. It also seems like trout get a kick in the butt from their late summer stupor and start putting on the pounds as the water temperatures drop and day length shortens. Keep this in mind as you watch the weather forecast through September and October.

During the fall, cold overnight air and water temperatures can cause trout, particularly those in mountain streams, to drastically slow down their feeding and metabolism until water temperatures warm with the sun. Meaning it's more worth your while to fish during the heat of the day, when the water is relatively warm. Compared to the cool water found in the mornings and late evenings.

Go for a walk

Believe it or not, there are still places in Southern Alberta that haven’t seen angling pressure this season, those places just require a bit more work to access than the ones everyone else fishes. If you find one of these fantastic angler-free havens, you can likely throw everything else in this article to the dust and fish a hopper. The fish probably haven’t been stung by a dozen of them in the last month like those cutts in the bridge pool on the Livingstone.

Work on your dead drift

Late season fish have seen their fare share of crappy drifts. So by this time in the season you need to bring your A-game when it comes to positioning, casting and mending. Spend the time to ensure you’re in the ideal position to make an excellent drift. This might mean crossing the stream or casting on your off shoulder, but it’s always worth the time and effort to reposition, because you might only get one chance at a spooky fish that’s already been caught this season. For those who aren’t familiar with reach casting, this casting method is excellent for improving your drifts in pretty much all river fishing situations.