In early November, John and I had the amazing opportunity to close up the shop and head out to Eastern British Columbia for some fishing with the guys from Hooke. Hooke is comprised of a group of fly fishers who, like us, are completely sick for fishing. Their goal is to share the excitement of fly fishing with the world through visual media and there's no doubt that they do an incredible job. These guys have a repertoire of amazing films and their Vimeo account has distracted me from hours of school work and time in the shop. Now back to the story. The crew showed up in the afternoon giving us just enough time to get aquainted and get a grasp on the days to come. The next day we took off to the Bow River in order to show the guys from Hooke as well as the Small Town DJ's, some of our awesome local fishing, before heading to BC. As many of us know, the Bow can be somewhat finicky and because it was late in the season we were woried that it might but tough to produce fish in the few hours we had. Amazingly, we were able to wrangle some great fish within the group and successfully got some good footage for the TV show and film.  Next, we were off to Fairmont Hotsprings, our base for a few days of cruising in Super Drifters and casting to bull trout. 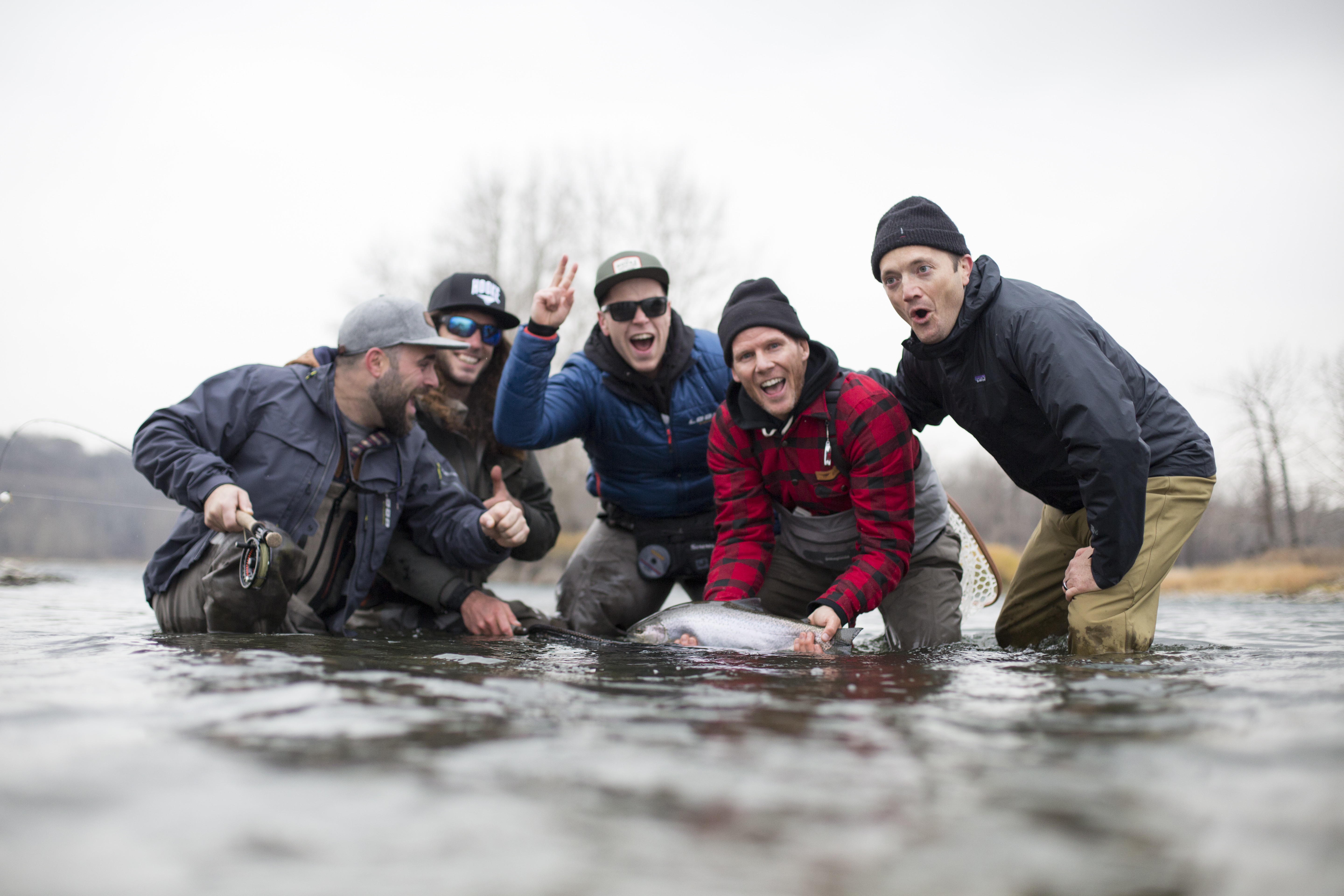 Mike from the Small Town DJ's with a great rainbow. Everyone else shares the stoke behind! 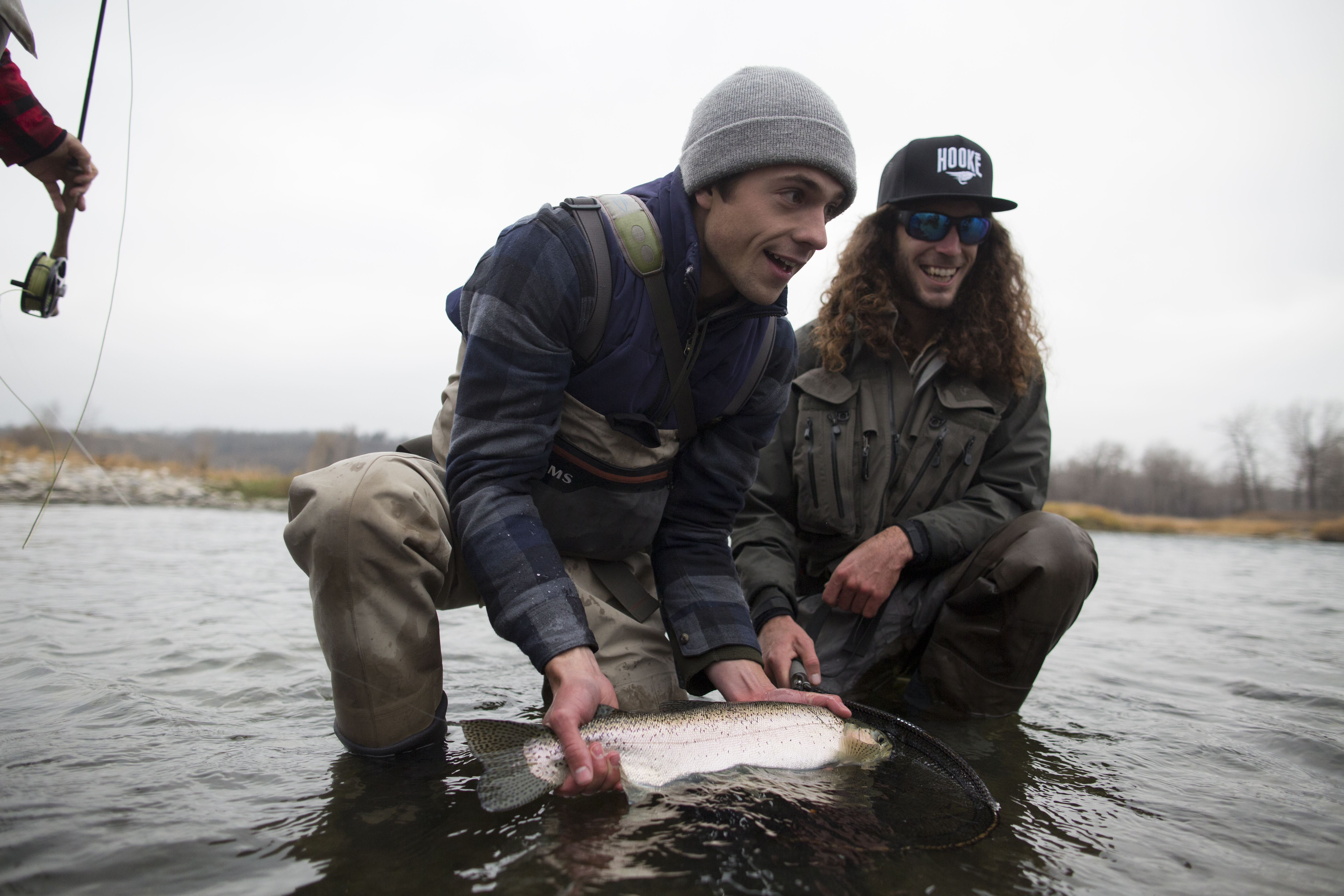 We had two full days of bull trout fishing with the guys and although the fishing was never on fire, the river gods provided. Each of us managed to hook into at least a couple of fish in the 5-8 pound range through the course of the first day and a half. It was great to see some nice fish come to the boat as Emile, Stu and Hugo captured it all on film. Satisfied with the fish we had caught, we were overjoyed when Derek hooked into a fish of monster proportions with only a couple hours of light left on our last day. 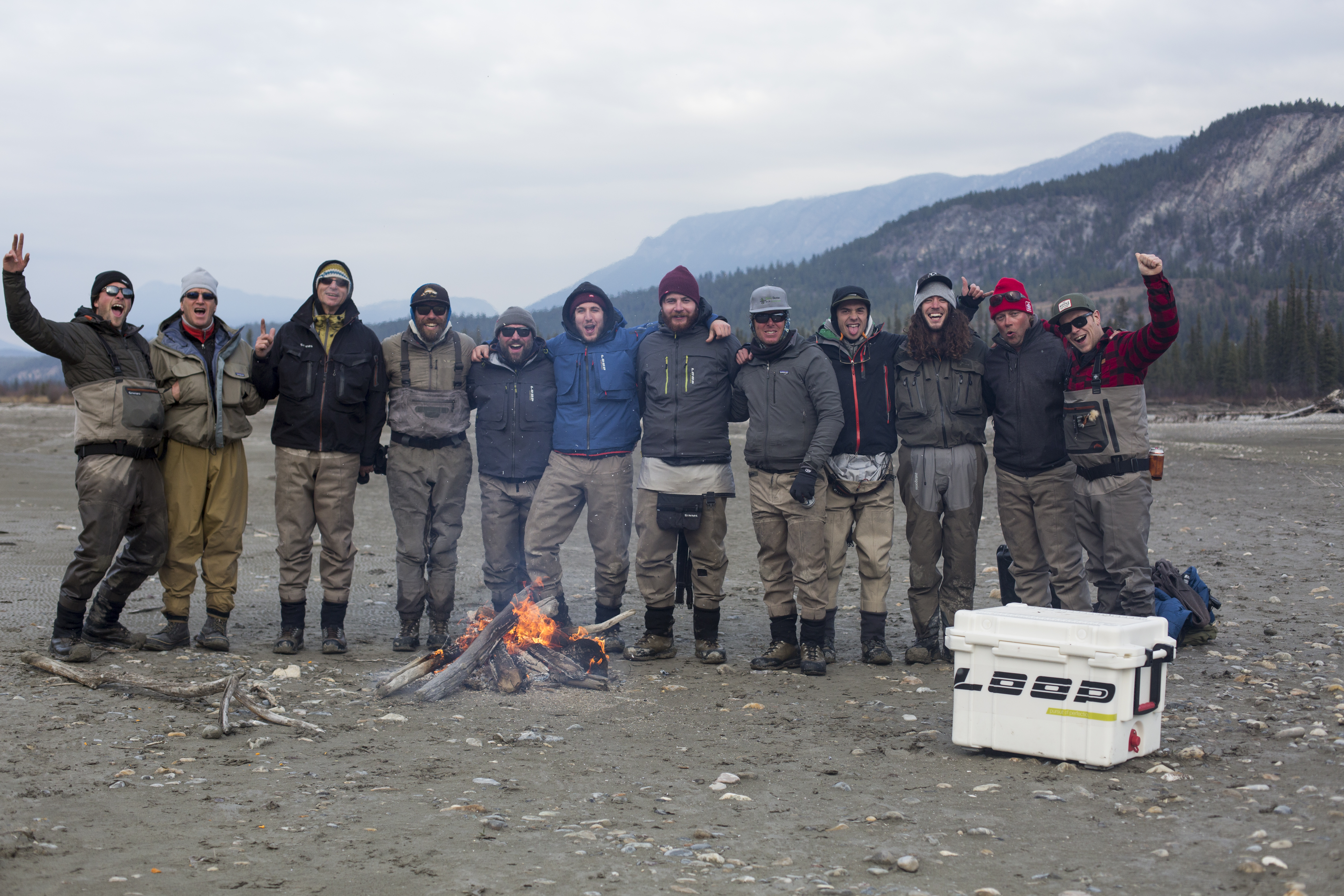 The whole crew, spreading good vibes while warming up by the fire. 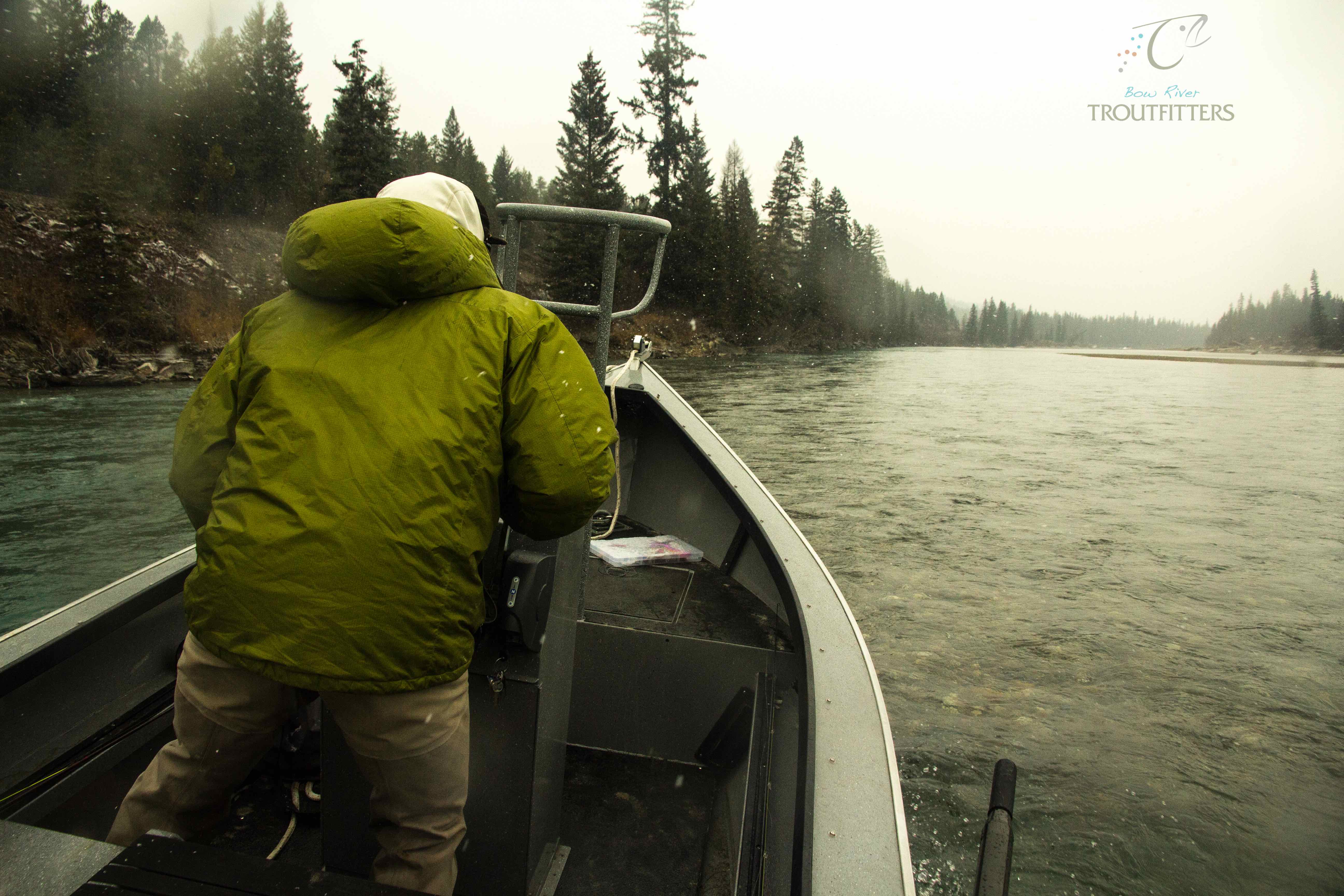 Cold jet boat rides were a theme on the trip. 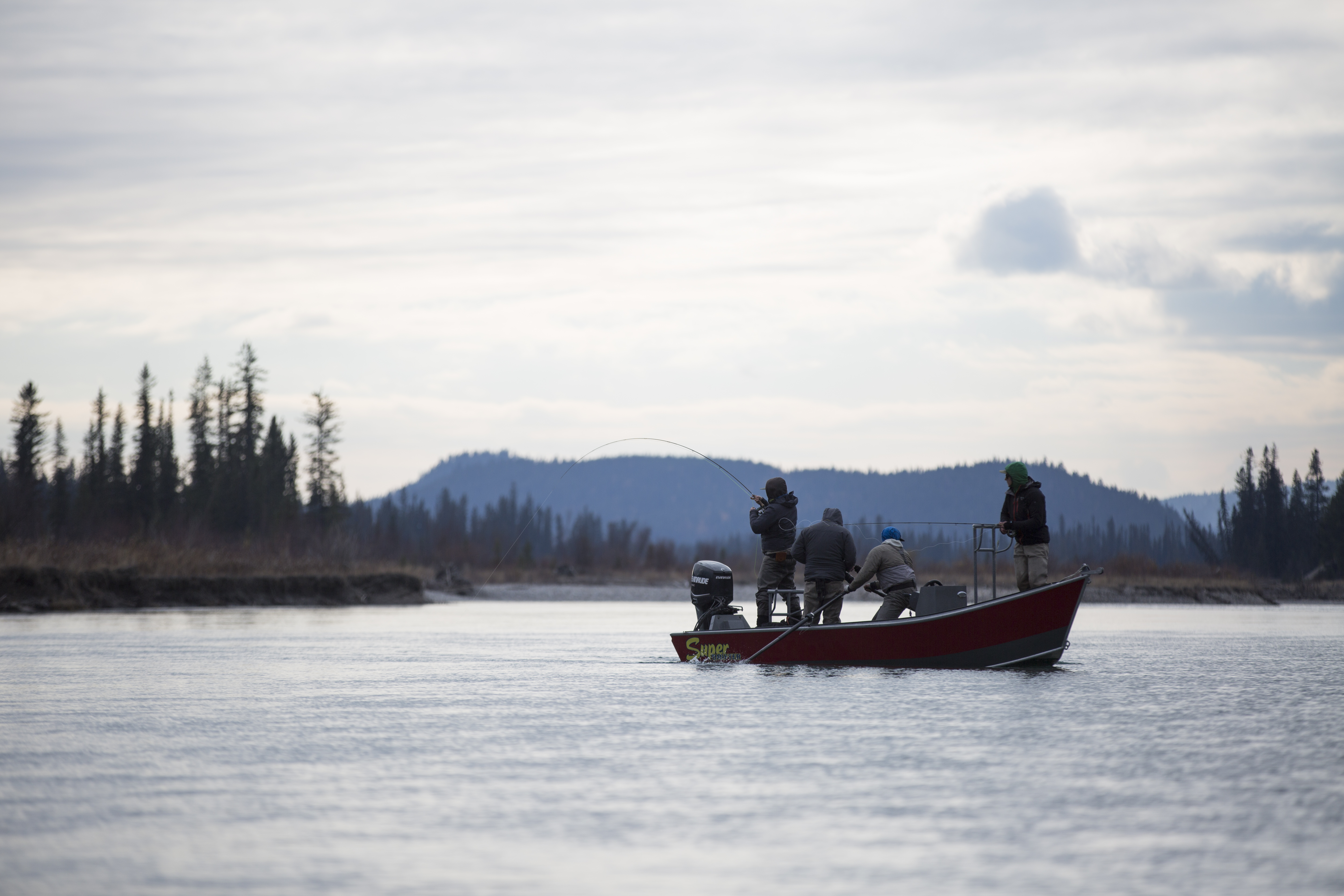 Derek hooks into something big.

Derek and I were fishing through a run with Spence on the oars; as we drifted along the last nice piece of structure Derek shouted like a mad man and set the hook into a ghost of proportions we hadn’t seen even close to on the trip so far. Having watched the fish’s bucket of a mouth eat his ten inch fly, Derek was losing his mind, and rightfully so. His ten foot seven weight Loop Cross S1 was nearly doubled over to the cork as the beast sped to the bottom. Derek is no amateur angler and knew how to put the right pressure on the fish, soon having it in close to the boat. But the fight wasn’t over, we were drifting ever closer to a fast riffled side channel and if the fish made it down there a real battle would start. Spence acted quickly as he pulled hard on the oars and I jumped out with the anchor to pull us upstream and out of trouble. Before I had the chance to get the boat under total control, Hugo, Stu and Emile showed up, who as per usual, were on their game to get the fish on film. Derek fought only for a few short moments longer before Spence had the behemoth in the net. BOOM! High fives were more than warranted as the fish hit the scale at 18 pounds, one of the biggest fish Adam, Spence or Curtis had seen throughout the season. What a finale! After a few photos we watched the fish swim away, back into the silty depths from which it came. Beers were cracked, fists were pounded, what a rush for all involved. Derek told us that bull was, without a doubt, his most memorable fish of the season so far. 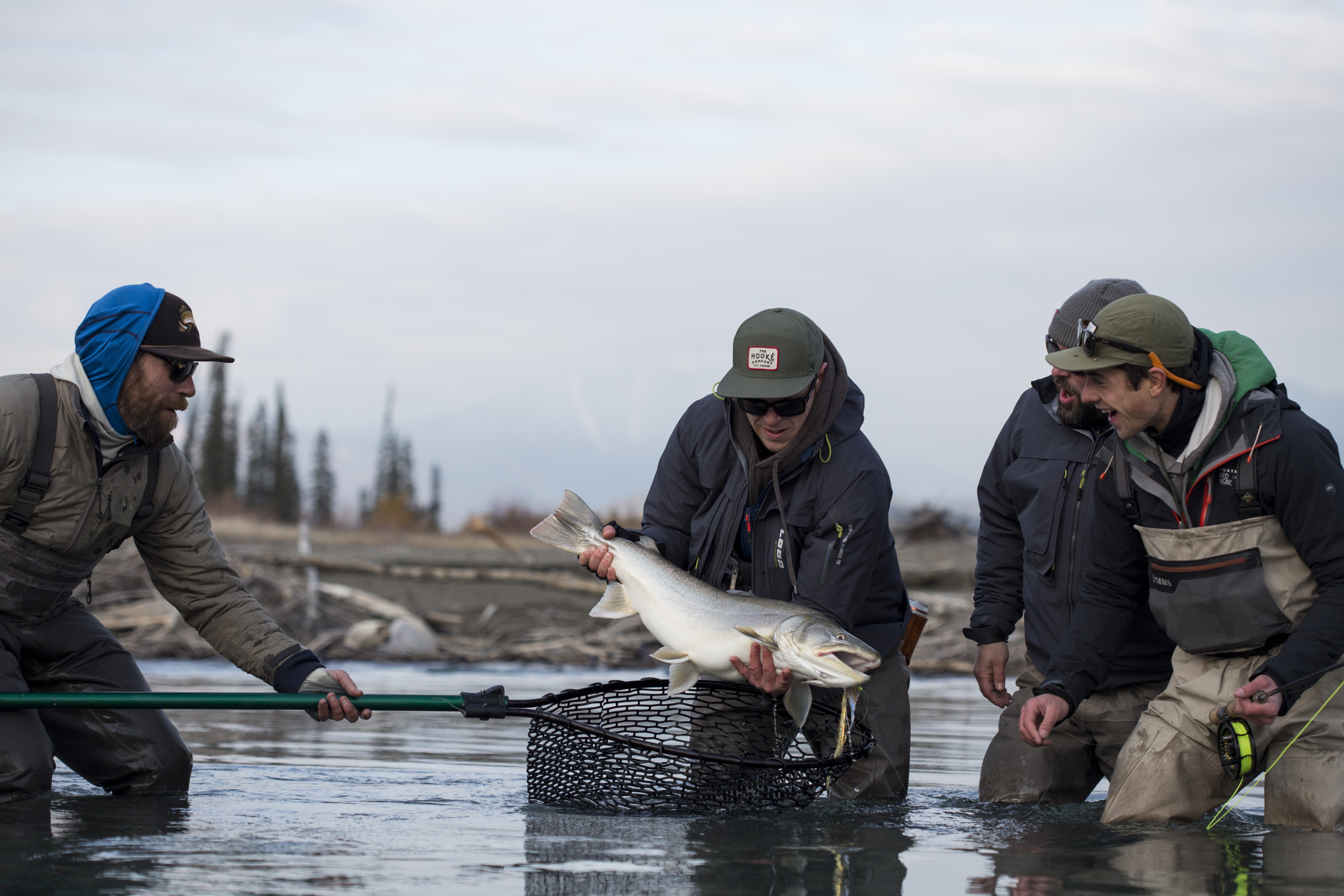 For me, this was the most memorable part of the entire trip, all of our efforts truly culminated in that moment and were embodied in the fish. If it weren’t for the guides who know the water so well, Wade for bringing out boats and equipment, and the amazing organization of Hooke behind the scenes, we probably wouldn’t have been able to see that fish and record it so well. Afterwords, we drifted and jetted back to the take out, catching a few more small fish, but over all buzzing from Derek’s beast. A sense of relief was evident among all involved on that last drift, hooting and hollering could not be held back as the guides, Hooke and BRT crew, vocally relieved our senses of elation after a couple of top-notch days on the water. The next morning we said our goodbyes as the Hooke boys left on their travels towards the Skeena country, as they looked to chase yet another ghost, one of the anadromous nature. 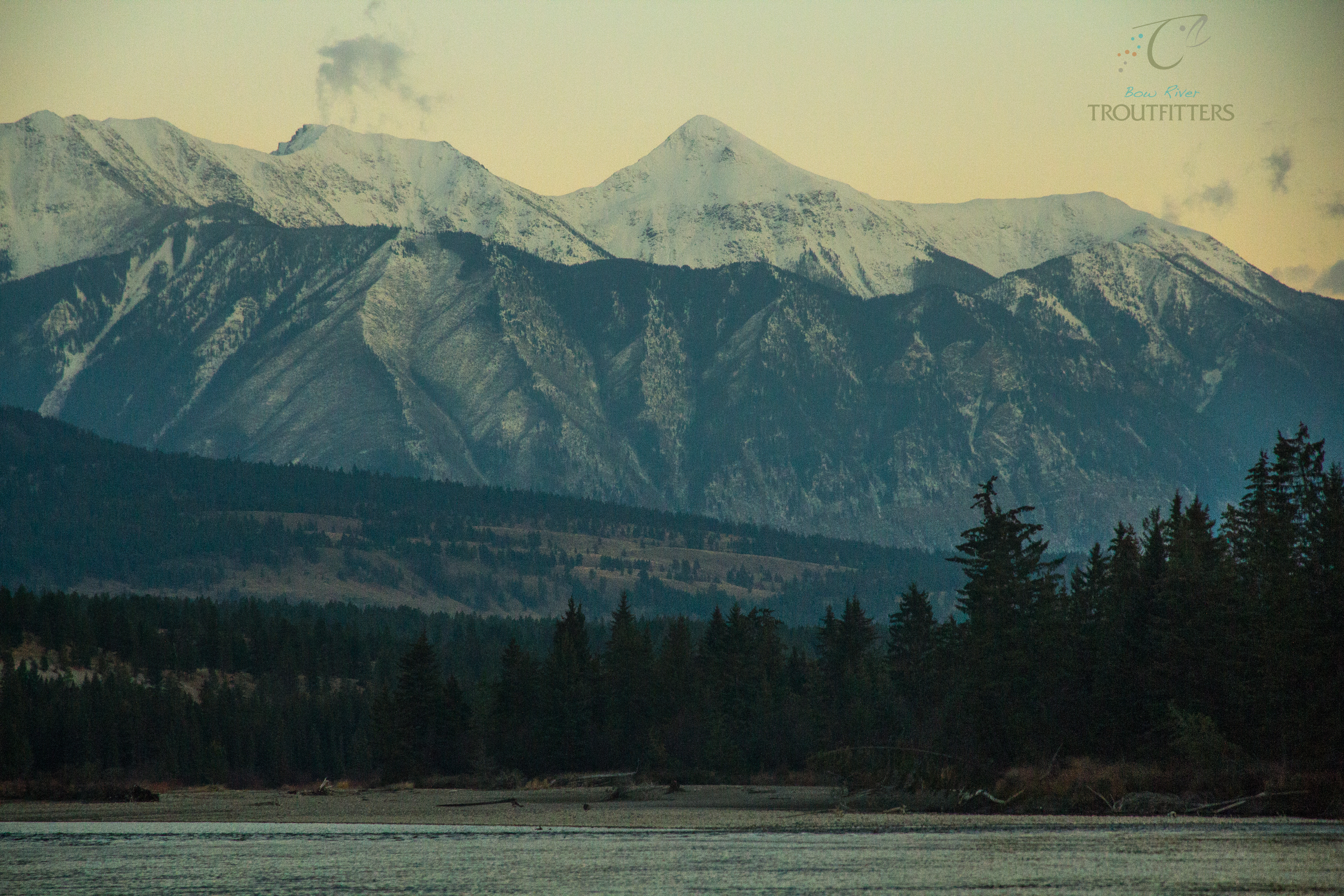 The local scenery certainly doesn't hurt the eyes if you happen to get distracted from the fishing.

Throughout the course of their summer travels, the guys from Hooke made some great connections with people and places throughout Canada. As a way to celebrate these great connections, they created "Along The Way" a film that shows and spreads the amazing fly fishing vibes that can be found throughout our beautiful country. No matter where you are, if you're near water, you're sure to find someone who likes to cast a fly to the fish that inhabit it. More likely than not, that simple commonality from enjoying fly fishing will connect you to people in your local area, throughout the country you live in and the world. Along The Way captures what many would consider the most important parts of fly fishing; creating lasting connections and communities with the people and the places we meet while fly fishing.

Thanks to Hooke for providing most of the photos shown here.

Click here to find the Clothing from Loop and Hooke featured in these pictures, on our webstore.