What is a shooting head?

A shooting head is a relatively short section of fly line (head) looped at both ends.  A level running/shooting line is looped to the back end and depending on the front taper of the head, a tapered leader/poly leader or sink tip is looped to the front end.  In fact, if one were to look closely at modern weight-forward fly lines, they could be considered as shooting heads save for the fact they are integrated with a running line.

With shooting heads, as with regular fly lines, the distance you can cast is proportional to the length of the head.  Because a line will travel through the air so long as it is turning over, it stands to reason a longer head will travel farther than a shorter head.  Where shooting heads really accel, in terms of fishability, are situations where room for your back-cast is at a premium, such as when longer casts with proximity to brush or a steep bank are necessary, yet where pin-point accuracy is not.  In these cases, a short section of fly line (head) with enough mass to fully load a rod will allow an angler to cast a considerable distance with minimal effort and space.  This may also be beneficial to those anglers suffering from tennis elbow or other such ailments that limit how much time and energy they’re able to invest in a day’s fishing.

The following will be a discussion on some of the merits and differences between two types of shooting heads commonly used for fishing with two-handed (Spey) rods; Skagit and Scandinavian heads.  Note, however, that both these types of shooting heads (and others) are adapted for use with single-hand rods over a wide range of applications.

Skagit shooting heads were developed for fishing the often steep and gnarly, tree-lined banks of steelhead rivers along the Pacific coast of the US and Canada where water levels often make wading quite difficult.  Anglers on these waters were experimenting with ways to catch more fish using extremely short heads that would not only allow them the ability to fish water previously un-fishable with traditional lines/methods but also enable them to cast the heavy sink tips and extremely large (intruder) flies they were developing for these aggressive sea-run rainbow trout.  This need for a line that could be fished in extremely tight quarters, coupled with an ability to cast heavy sink tips and flies is what gave rise to modern Skagit heads, i.e. tight casts and heavy payload were mutually inclusive to their overall design/taper.  As mentioned previously, it is the front taper of the head that determines the type of leader to be used.  The profile of a Skagit head is such that there is very little/no front taper.  This enables a Skagit head to lift a heavy sink tip from the water and turn it over through the air due to the relative continuity of mass along its length.  Skagit casting is often referred to as “sustained anchor” Spey casting.  This implies that as the rod lifts the line from the surface film of the water, surface tension and the actual mass of the line load the rod and allow the angler to reach out to far away lies from a very confined space.  Skagit casting has become very popular due to its relative ease of execution and how little time it takes to learn to make fishable casts.  Another difference between Skagit and Scandinavian heads is the necessity of using relatively heavy tips.  Skagit heads require sinking tips to add length and mass to create a proper anchor for Skagit casting.  Scandinavian heads on the other hand, require longer tapered leaders or polyleaders to anchor ‘touch and go’ casts and to turn over and present smaller flies. 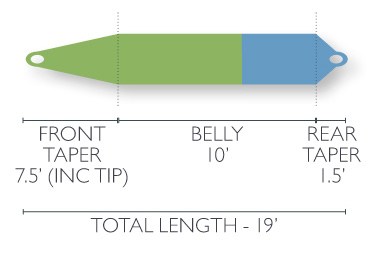 Scandinavian (Scandi) shooting heads came about much the same way as Skagit heads; via the need to cast flies to anadromous fish in tight quarters, however, the major differences in taper and length are due in part to the types of casts utilized and the much lighter payload the Scandi head is meant to deliver.  In this case anglers are fishing smaller/lighter flies (on average) and not utilizing the heavy sink tips employed in the pursuit of steelhead, thus the front taper is much longer/finer than with the Skagit and mass is biased towards its back end as opposed to being more continuous along its length.  The Scandi head is also longer on average than the Skagit.  As such their taper design is conducive to the type of casts generally associated with the Scandinavian approach.  “Touch and go” casts are typically employed with these shooting heads, where only the tapered leader and portion of the front taper of the head are used to anchor the cast while the mass of the head nearest the rod is accelerated, loading the rod and effecting the cast.  While these casts are more elegant than the Skagit cast, they typically take more time to master. 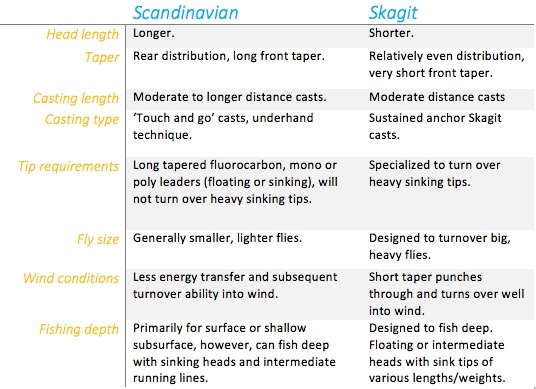 Some general differences between the two types of shooting heads.

As anglers, we typically want the option to pursue fish by any means necessary and this can often mean having multiple rods rigged with lines dedicated to a very specific approach.  However, if you have a minimalist sensibility, a system of shooting heads that can be looped to a common running/shooting line with various leaders from floating to fast sinking will give you the option to fish a single rod yet adapt your approach as the conditions or your desires dictate. In part two we’ll talk about the differences between the specific shooting head models we carry at BRT and why you’d choose one versus another in different conditions.

Check out part two of this blog