Brown drakes (Ephemera simulans) are a burrowing mayfly that live predominantly in lower elevation streams throughout the South-Western part of the province. These insects are certainly one of the largest mayflies (insects in general) that trout see in good numbers here in Alberta. Brown drake nymphs can provide good fishing, but it’s the dries that get anglers excited as both the duns and spinners are well known to provoke that largest trout around to lose inhibition and do push-ups all day long. I’ve personally had some of my best dry fly fishing on brown drakes. 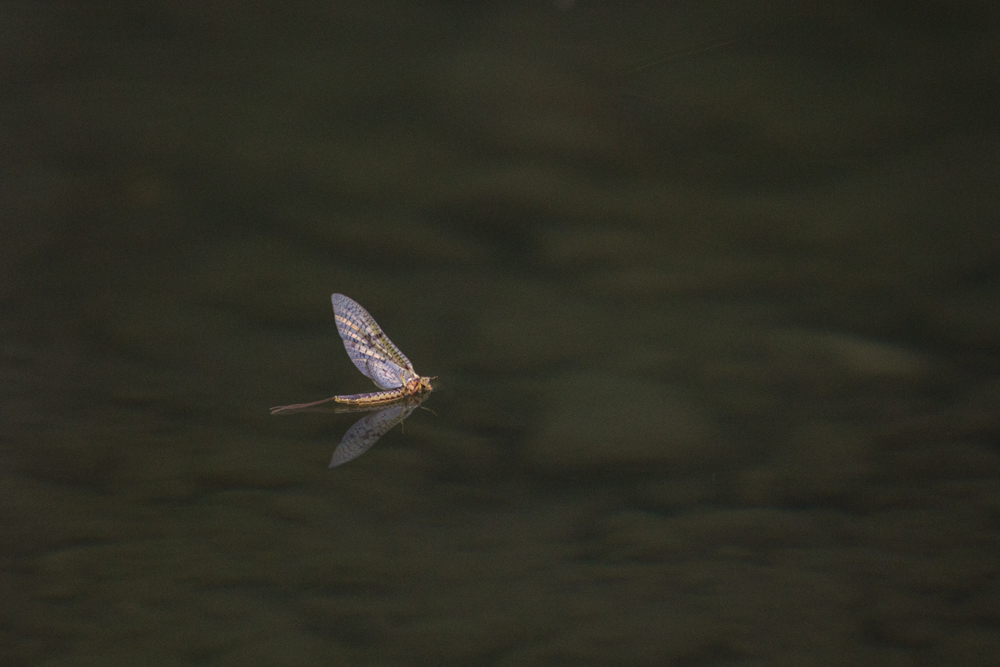 Brown drakes are mayflies (ephemeropterans) that belong to the family Ephemeridae, which they share with a few other large drakes including the Hexagenias. The genus Ephemera includes other drake hatches but brown drakes are the most common here in Alberta. Most of the mayflies in this genus are burrowers, brown drake included.

Where to find them:

Brown drakes are found throughout the province, but are more prevalent in slower moving, low elevation streams. Brown drake larva are burrowers of sand and fine cobble, so rivers that have these substrates are a great place to look for drakes. Low elevation tributaries of the Red Deer River see excellent brown drake hatches and you’ll also find them on the Bow, its tributaries as well as lower portions of the Old Man watershed. Look to find brown drakes hatching from mid-June to early July on most years.

Brown drake nymphs are burrowers that live in fine cobble and sandy bottoms on lower elevation streams. Nymphs generally live for one full year prior to emergence but may live for two in colder areas. Hare’s ear nymphs (especially when tied sparsely) are great imitations of burrower nymphs including brown drakes because they’re long, slim in profile and light in colour. Once nymphs are mature, they will swim quickly to the surface and emerge into duns. Brown drakes usually hatch in large numbers and you’ll find that all the drakes found in the stream will usually hatch within days (no more than a couple weeks) of each other, providing amazing fishing. As with many hatches, fishing the nymphs can be quite effective throughout the season, but will pick up significantly in the weeks, days and particularly hours leading up to emergence. During this hatch, nymphs fished using a quick Leisenring lift from bottom to surface would likely be deadly; although we recommend sticking to dry fly imitations when the hatch is in full swing (for the sake of fun.)

Once nymphs have swum to the surface, drakes quickly emerge and fill their wings as duns. From my experience, our local brown drake duns will usually ride on the surface for some time prior to flying, where they provide great food for trout. Fishing size 10-6 extended body drakes is the best imitation for duns. When brown drake duns hatch in large numbers, make sure to get a good dead drift right over a trout’s feeding lane, because if there’s no need for the fish to move to food, they wont move to it. Be prepared to stay late, as the hatch frequently starts late afternoon or into the evening and fish will continue to feed on duns until well after dark. I have found that hot, muggy days can provide and excellent evening hatch of brown drakes. On a gloomy day expect the hatch to happen throughout the day. 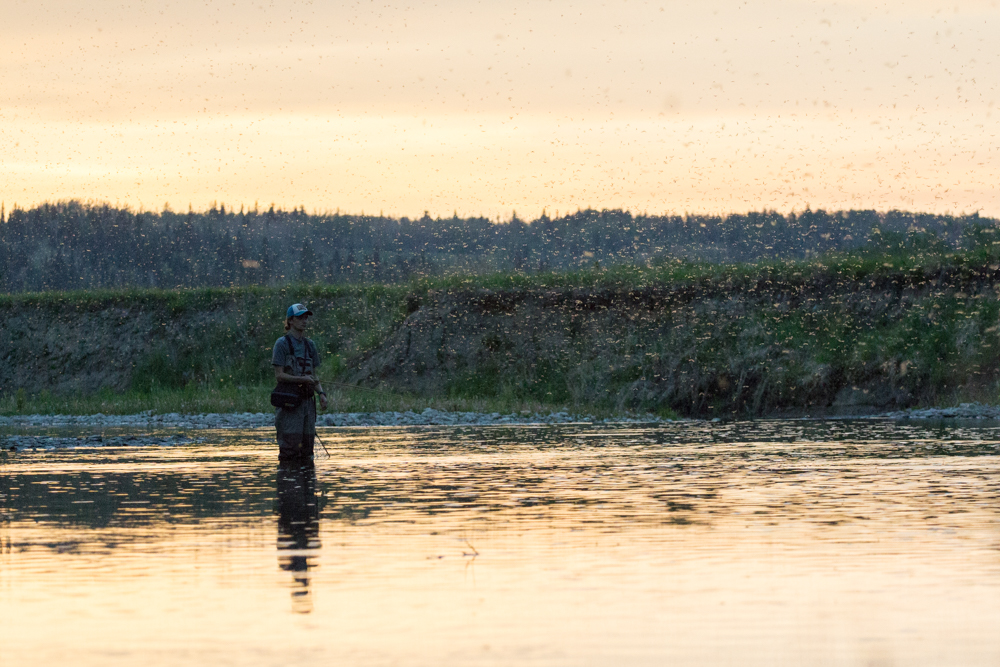 Jon Cooper casts to rising fish (eating duns) among swarms of brown drake spinners. On this evening we did not experience a spinnerfall, luckily a heavy emergence of duns had trout readily eating on the surface.

After leaving the water’s surface, duns fly to nearby cover within the riparian area and molt for a second time into spinners. Spinners will congregate and mate in the nights following emergence. This congregation can be an amazing sight at the spinners will meet above the river creating dense clouds that span the width and length of the river. In many places, the spinnerfall provides the most exciting fishing because emergences of duns tend to be spread out, while all the spinners ‘fall’ at about the same time. These spinner falls nearly always happen in the evening and are best fished using any pattern that has its wings tied perpendicular to the body creating a lower case ‘t’ shape. Matching colour is not usually as important when fishing in the evening, but it always pays to look at the colour of the naturals, particularly those naturals that the trout are feeding on, to match this part of the hatch as closely as possible. 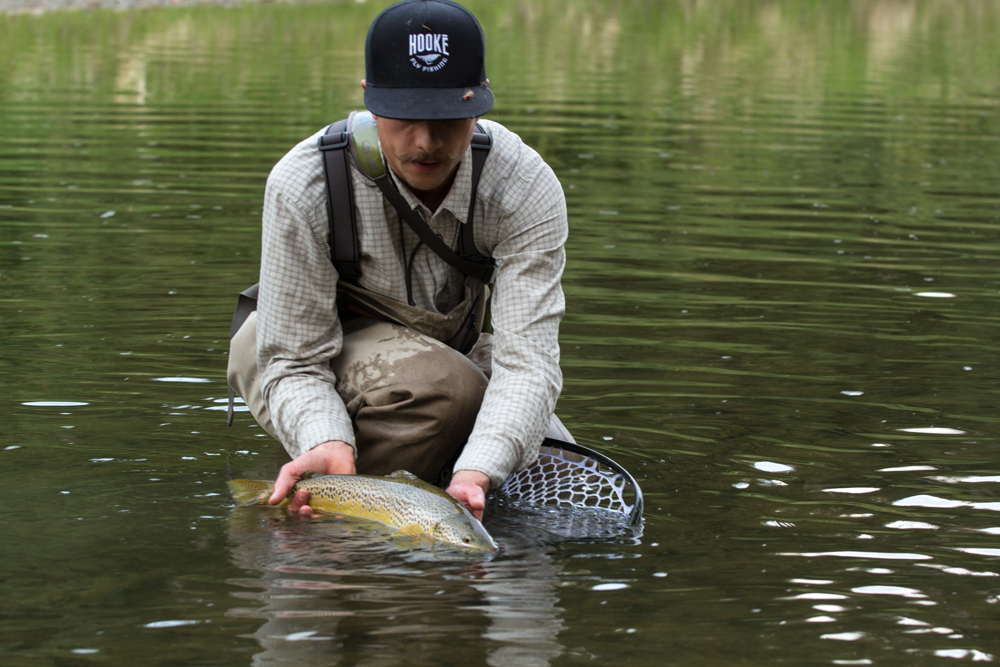 Mark catches a brown trout on a brown drake. Some proof that the person who wrote this article knows at least a little bit about how to fish.