The annual Stonefly hatch in early July is one of the most exciting times of the year for both anglers and fish alike. During this time trout can be easy to fool, providing a great chance to experience success on dry flies. Choosing the right flies, leaders, location, and time of day are all critical pieces to having a great experience on the water during this exciting season.

Stoneflies spend most of their lives living in the rocks on the bottom of the river in highly oxygenated areas. They will typically stay here for one to two years before they make the slow crawl to the bank at the start of July. After they have made it out of the water and onto a dry rock, they will emerge from their exoskeleton. At this point the females begin to dry their wings and the males begin looking for mates. The following evenings the females will hit the water to lay their eggs. This is when the magic happens. 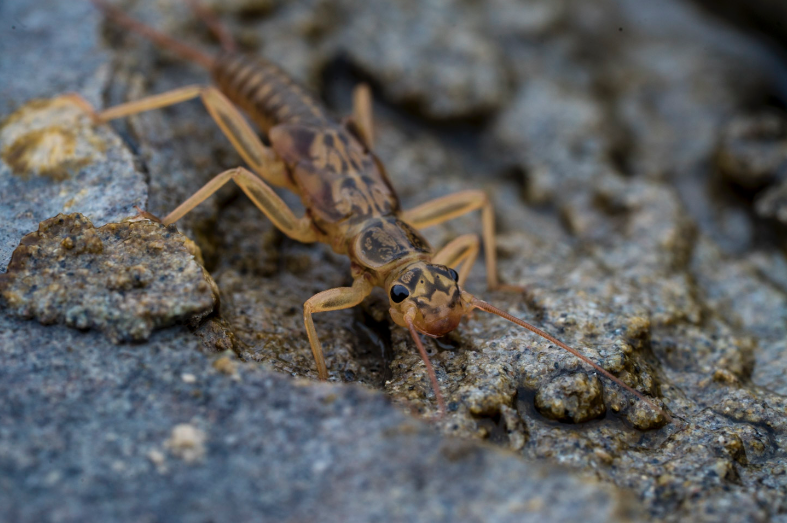 Having the right fly on the end of your line is crucial. It is easy to get caught up in all the fancy colors and patterns in the fly bins. However, there are two main factors to consider when picking a Stonefly imitation: silhouette and buoyancy.

A fish makes a split-second decision on what to eat based purely on the outline of a potential food item against its background. Making sure the shape of your fly on the water appears like a real Stone is essential. All the different parts of a Stonefly put dimples in the water that create an unnatural refraction of light which draws the attention of a fish. Things like legs and even antenna create these areas of disturbance and can help indicate to a fish whether something is an easy meal.

Having a buoyant fly helps reduce time spent applying floatant and enables the use of droppers. Putting a dropper off the bend of your fly can be a great way to pick up a few fish when the surface action slows down.  However, real Stones have a wide but low profile, (y’know that whole surface area thing), so having a bulky fly can be a big turn off for trout that have been hooked on a foam imitation before. Picking up a variety and experimenting is a great way to figure out what works best for you.

Color is not important. Fish cannot make out the color of a fly against a bright background like the sky. Keep it simple, pick a color you like.

Fish are generally not leader shy when they are smashing big Stoneflies. This is a good opportunity to use heavier tippet to land those bigger fish that tend to come out this time of year. Thicker tippet will also help turn over larger more air resistant patterns and reduce tangles. Typically, a standard nine-foot 2X leader will get the job done. Some anglers like to step down to a seven-and-a-half-foot leader to further assist in casting, but this is seldom necessary. It is a good idea step down your dropper tippet at least one size from your leader to help reduce the number of times you lose both flies.

Due to the seasonal high-water fish will often be sitting close to the banks. This area gives the fish a reprieve from the faster current while also providing good oxygen levels and plenty of food (like stoneflies!). Trout will often sit within 5-10ft of the bank so don’t try to outdo yourself by casting to the middle of the river.

Keep in mind that the Stonefly hatch starts downstream on all rivers and gradually works its way upstream. As water gets further away from the headwaters in the mountains it warms up. This provides the correct conditions for Stones to hatch earlier in the downstream sections. So, keep in mind that while they may be coming off on the lower sections it might be a week or more before they start emerging on the upper portions. As the activity starts to taper off in the next couple weeks it is a good idea to start looking at stretches of any given river that are further upstream to follow the hatch.

Stonefly activity increases during low light as this provides protection from predators and the heat of a summer day. Stoneflies will hang out in bushes and shrubs along the riverbank throughout the day and make their way down to the river in the evening. During this time, they will lay their eggs on the surface of the water throughout the night and into the morning. The egg laying process leaves them extremely vulnerable and makes them an easy meal for trout. Often, to both release their eggs and spread them out, female Stoneflies will skitter along the surface and form a small wake behind them. This is like a dinner bell for trout. It is a good idea to give your stonefly imitation a twitch or two to mimic this. Once the sun comes back up most of the stones will head back to cover. Your best bet is to get out there late in the evening or early in the morning to capitalize on this activity before it drops off. This is also a great way to get some fishing in before the temperature rises.

With all this in mind, get out there and hit the water! You never know when a 24-inch brown will rise from the depths and flush your pattern like a toilet.