Proper fish handling is essential to protecting our province's currently bountiful resource. Using proper catch-and-release techniques will help to ensure that the future of fishing in Alberta is a bright one. Before I get all purist on you, I would like to mention that it is not at all unethical to keep fish that are in accordance with a particular water's fishing regulations. However; even if you are harvesting fish, you will inevitably be releasing fish at some point if you are correctly following these regulations by obeying catch limits, size limits, etc. Besides obeying catch limits, there are plenty of populations of wild trout that are simply not sustainable enough to handle harvesting. Only catch and release has the potential to effectively maintain these populations-- if it is done properly. It's important to understand that just because a fish swims away, doesn't mean that it will survive the rest of the season-- or even the day. Knowing some key techniques for catch and release can help reduce post-release mortality rates and ensure that we have healthy fish populations for years to come. 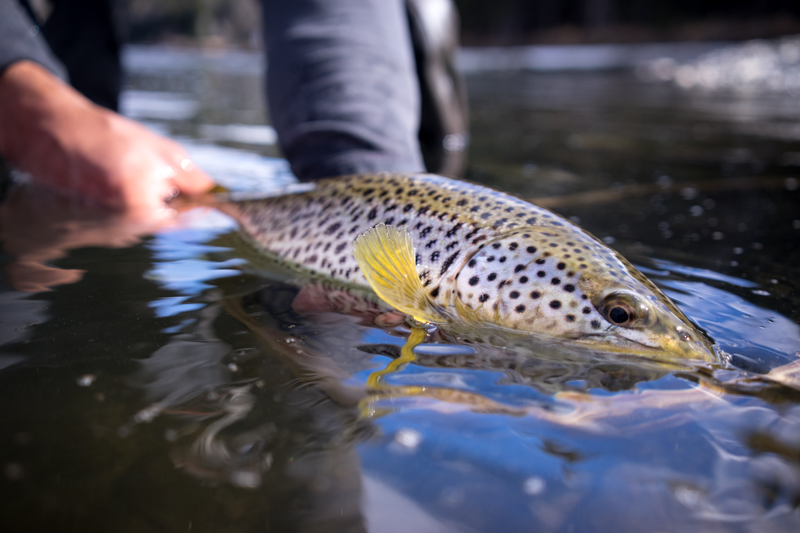 Aaron keeps a beautiful brown in the water, proving that keeping a fish wet can make for an excellent photograph.

Here are a few simple things to consider when practicing catch and release to ensure that you are angling responsibly and not killing fish that you’ve released:

Low-impact gear such as rubber nets, pinched barbs, and hemostats can help limit harm and allow for a quick release. Older fishing nets that use abrasive materials can remove the important protective coating that is essential to fish health. Barbs that are pinched are easy to remove quickly, and really, do you need to rely on barbs to land a fish? When a fly finds deeper down a fish’s throat, rather than nicely tucked into a stiff upper lip, hemostats or pliers can make removing the fly a quick and easy process.

By fishing with rod/line weights that are appropriate for the fish you’re targeting, you can have the ability to land fish as quickly as possible. By not being “undergunned”, you can prevent fighting a fish to exhaustion, and allow for a quicker recovery and release.

While carefully removing the fly from a fish’s mouth, it’s important to gently cradle it in the water, rather than squeezing it around it’s pectoral fins, which can cause internal organ damage. Try not to over handle the fish either to avoid removal of their protective mucosal layer. If you need to get a good grip on it, grip just in front of the tail fin and gently cradle it underneath with your other hand. Don’t move the fish back and forth to try and revive it, as fish aren’t meant to swim backwards and this can damage the gills. Placing fingers inside the gills can also be very damaging and should always be avoided.

Warm water holds a lot less dissolved oxygen that cold water, so hot summer months with little rain and low flows can be very detrimental to fish health. When fish are already battling the stresses of warm water, they are much less likely to be able to survive being caught. Make sure to keep fish in the water, avoid taking photographs, and release them as quickly as possible. It’s best to simply avoid fishing when water temperatures are 22 C or higher.

If you are holding a fish out of water for a photograph, make sure to do so for no longer than 5 seconds. Remember, the fish is already experiencing oxygen deprivation as a result of the fight, so suffocating it at this point is not what you want to be doing. Consider getting pictures with fish just below the water’s surface. It not only allows the fish to breathe, it can make for some really cool shots.

Release Fish as Quickly as Possible:

Not every fish needs to be photographed. By getting the fish released as soon as they are ready to go, you can act like you've caught fish before and get your line back in the water as soon as possible.

Be sure to check out some of these other great resources on how to responsibly practice catch and release fishing: